What's the exact wording on the ballot going to be?
Shall the Town Council Vote Authorizing Expenditures of up to $115,943,324 to Design, Construct and Equip a New Elementary School and a New Middle School and to Renovate Cape Elizabeth High School and Issuance of the Town’s General Obligation Bonds Therefor be Approved?

The Town has estimated that IF it borrows money at 4% over 30 years, property taxes will increase by 23.8%, and will increase 28% if the borrowing is over a 20 year term

From the Press Herald, "According to Town Manager Matt Sturgis, the owner of a home assessed at $400,000, who now pays $8,104 per year in taxes, would see their bill go up $2,072 to $10,176."
(see #1 for details)
Was a budget ever set or discussed at the beginning of this project?
No budget was set at any point in the project.
Why is the state of Maine not paying for any of this?
Because the school district never applied for state funding through the Major Capital School Construction Program. There is a waitlist as more schools apply than the state approves for funding every year.

From the Maine DOE's summary of this process:
"In seeking solutions to educational facility issues, the Maine DOE first looks to the possibility of renovations or renovations with additions. New school construction projects are only considered in instances in which renovation projects are not economically or educationally feasible."
That won't do if the district is philosophically averse to renovation and has decided that it must have new construction at all costs. More on that later....(see #2 for details) 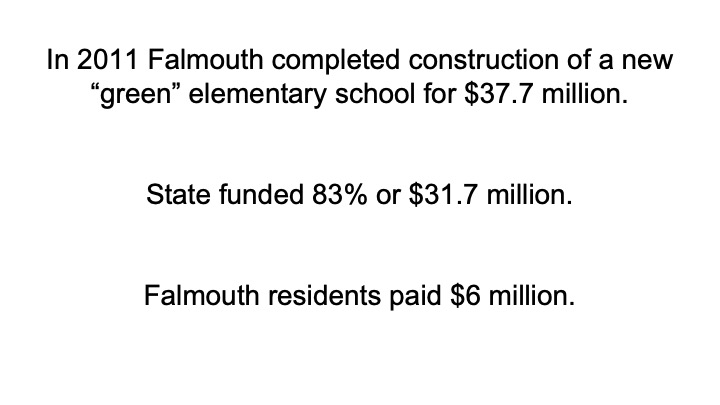 How much of that $116 million will go towards new construction at the lower schools and how much towards renovations to the high school and why does this even matter?
Only $4.9mm will be allocated to the high school.

In consequence of this decision the high school is also due for a teardown and new construction in the next 5-15 years—probably the lower end of that range. That's because the school board along with the architectural design firm hired by them have determined that the high school is nearing the end of its useful life and that it needs an investment of $14mm to scrape by for another 15 years. If $14mm were deemed necessary for the high school at a time when the cost of new construction for Pond Cove and the Middle School combined was quoted at $60mm (pre-COVID), now that the updated estimate for the latter is $111mm (nearly double), how can $4.9mm, given post-COVID costs of construction materials, instead of the original $14mm, suffice to rehabilitate the high school for the same 15 years? 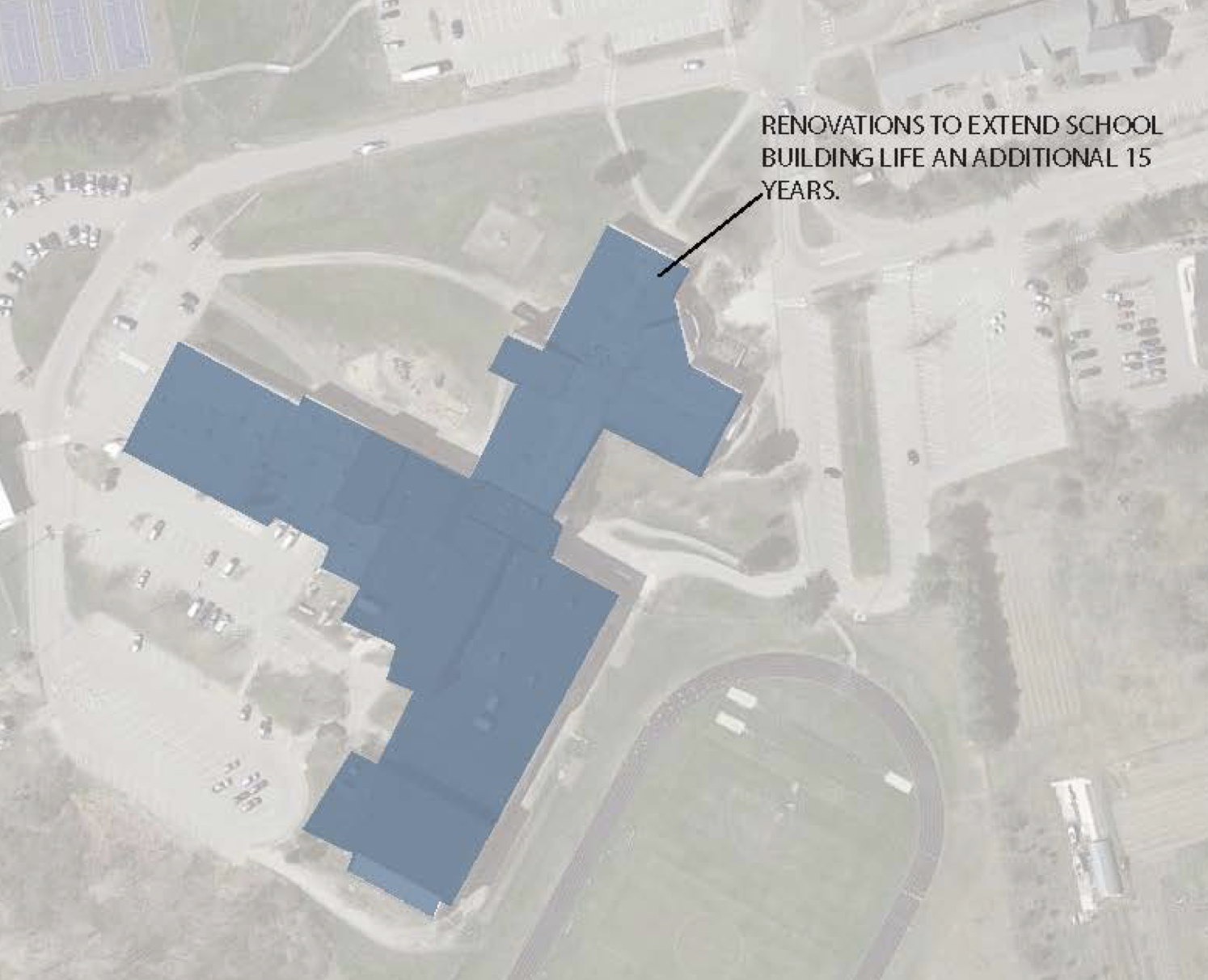 When we're halfway into servicing this $116mm bond, and probably even sooner, the school board must seek a second bond for new construction of the high school, at least if the same process and rationale be followed as with the two lower schools.(sources: 1, 2, 3 — see more relevant screenshots from these sources below)

Does a "no" vote mean I don't support Cape schools?
Absolutely not! The current proposal is an overreach by any measure. If voters reject the project the school board will start over. Defeating the current proposal will lead to a more economically and environmentally responsible plan. We have done this before. When a big, new, expensive library was proposed a decade ago, voters rejected that plan. A year later, Cape implemented an environmentally and economically responsible library renovation. Reject this irresponsible plan and tell the School Board and Town Council to come up with a more reasonable and affordable project.

Not taking on such onerous debt also means the taxpayers will be in better financial condition to absorb increases to the school budget over the years if any should be necessary for teacher raises and bonuses and for additional programming for kids.
How does this proposal compare to comparably sized schools?
At a proposed size of 219,000 sq. ft. for less than 1000 students, the proposal greatly exceeds other schools with simi- lar enrollment. RSU 10 is building a 178,623 sq .ft. K-8 school for 1034 students and RSU 54 is building a 152,730 sq. ft. building for 942 pupils. Cape's proposed 219,000 sq. ft. also exceeds state guidelines and that size does not include the outdoor amphitheater, “boardwalk,” “beach," “forest” areas, and green roof.
Can the schools be renovated?
Yes, the current architects and engineers concluded that the buildings are in “satisfactory condition” and “well main- tained.” For example, the 2004 kindergarten wing (which we have not finished paying for) was designed to be able to carry an additional floor.
Has renovation ever been independently evaluated by experts or seriously considered by the school board?
No evaluation of renovation ever occurred. The 14 page Renovation vs New Build “report' was put together this summer, 2 years after the building committee voted to move forward with new construction.
What would it cost to renovate?
While we don’t know exactly, because there has never been an evaluation, in 2019 the current architects estimated that renovation would be approximately 40% less than the cost of new construction. The new construction requires almost $10 million in site work alone, money that could be well spent on renovating or adding to the existing buildings.

For context from neighboring districts, Yarmouth renovated four of its schools for a total of ~$52mm in 2019, nearly doubling the size of one school.
What would it cost to renovate?
While we don’t know exactly, because there has never been an evaluation, in 2019 the current architects estimated that renovation would be approximately 40% less than the cost of new construction. The new construction requires almost $10 million in site work alone, money that could be well spent on renovating or adding to the existing buildings.

For context from neighboring districts, Yarmouth renovated four of its schools for a total of ~$52mm in 2019, nearly doubling the size of one school.
Will the tax hike adversely affect the town’s ability to fund salary increases for teachers, public works, public safety, the library and other town services and employees?
Absolutely yes. This extraordinary increase will pressure the school and municipal budgets for years to come.
I am 65. The promoters of the new school tell me that the Tax Stabilization Program will freeze my property taxes at current levels. Can I count on this promise?
No. This new state law is only funded with special COVID revenues for the first year, FY 2023. The Governor did not sign the law creating this program and the Maine Municipal Association lobbied against the law. This is a big, expensive program that most likely will be repealed, amended with means and asset tests, or simply remain unfunded after year one.
What about the Property Tax Deferral Program?
That program pays taxes that you owe by putting a lien on your home, for the deferred taxes plus interest, which will be refunded to the state when you sell or die. To qualify, you must be 65, or permanently disabled, AND joint income must be less than $40,00/year.
Will this tax hike make CE more affordable or less affordable?
A 24% tax hike will make Cape less affordable for young families, middle income families, and seniors on fixed incomes.